Create an Account - Increase your productivity, customize your experience, and engage in information you care about.

The Arvada Fire Protection District has been providing fire and emergency medical services from eight fire stations since 1980. Due to service demand, a ninth station is in the design phase and soon to be constructed. New Station 9 will be located near Candelas Parkway and Highway 72.

By examining the growth within the city as well as the trend of increasing calls for emergency services it seems easy to deduce that better coverage is needed throughout the district. Nonetheless, building a fire station and then staffing that station is costly. Making the right decisions regarding when and where to place fire stations is not better left to chance. Additionally, Fire and EMS resources must be placed in a strategic manner to provide the best possible coverage to our community all the while accounting for future growth. Utilizing Geographic Information Systems (GIS) and Data Analysis provided us a scientific approach to making sound decisions regarding future fire station locations.

Do we need nine fire stations, or can we cover with eight?

An increasing number of calls for emergency services and growth in the northwest reached a point where better coverage was required. A multitude of variables factor into determining when and where to build a fire station. Elements such as projected emergency calls, community growth, and budget constraints to name a few, provide the data related to when a new fire station is needed; while property size, road accessibility, city infrastructure, and workload reduction are some of the factors that play into where to build. A large part of providing the best emergency services possible is reaching our customers in a timely manner. To provide the best coverage for our citizens and to work within our financial means we needed to answer these two questions:

We answered these questions using GIS and data analysis. More specifically, we used a Location Allocation Analysis to solve a service/demand problem. This type of analysis helps to maximize the services we can provide from fixed facilities to a set of demand points. In our case, the fixed facilities are the fire stations and the demand points are the locations we need to provide emergency services to. For fire stations we looked at our current station locations and a few theoretical locations based on available properties that were large enough for a fire station. Once several theoretical facilities were identified we needed to determine which of the properties we could provide the most service to our demand points from. To evaluate our demand points, we had to move further down the rabbit hole and evaluate two variables. The first variable was the geographic make up and infrastructure of the district such as homes, commercial buildings, schools, open space, roadways, and intersections. We need to provide emergency services to as many of these physical locations as possible within an acceptable response time. Secondly, we must account for projected emergency calls for the entire district. If we are going to build a new fire station or perhaps relocate existing ones, we need to evaluate the call density district wide. As you can see in Figure 1, the call density for the district is not evenly distributed. The majority of calls for service occur towards the eastern side of the district and gradually decrease in density to the west. 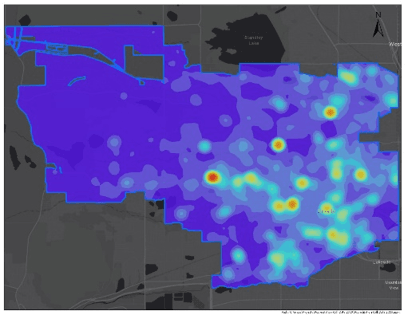 If we merely distribute firehouses at fixed distances from each other to account for only geographic area, the workload related to emergency response would then be unevenly distributed across the fire stations. Simply shifting stations to the west could increase response times due to emergency apparatus having to travel farther to cover into the busier areas of the fire district. To account for this, we need to place fire stations in a manner that will cover the geographic area while maintaining adequate resources in busier neighborhoods to augment the call load distribution between fire stations.

So how do we account for calls that haven't happened yet?

Using historical call data can help predict the general area of where emergency incidents have a higher probability of occurring. However, historical call data is exactly that - history! It's hard to predict future call volume using historical data. To that point, simply placing fire stations based on historical call data would unevenly place our fire stations towards the busier areas leaving far too much geographic area where growth is occurring inadequately protected. That being said, we simply can't ignore the historical call data as it does show where the busiest areas are within the district and we need to ensure adequate coverage for those areas as well. In order to account for both geographic area as well as call data, we looked at street nodes within the road network throughout the city. Street nodes are a GIS term for the points along a road on a map where a road segment contacts another road segment (Figure 2). There are fewer street nodes towards the western end of the district and a greater amount in the core of the city due to a denser population and infrastructure layout. 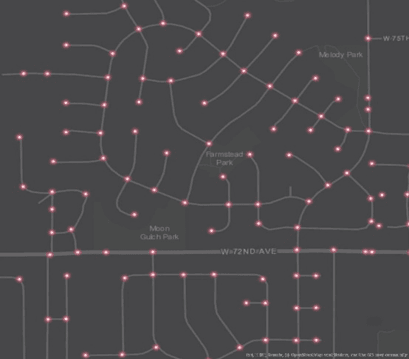 If an apparatus can effectively reach a particular street node from a fire station within an appropriate response time, then firefighters can theoretically provide service to the areas adjacent to that node and along that street segment.

To make our demand point data even more meaningful we took historical emergency incident data for the previous three years and attached each incident to the closest street node. Doing so made each street node representative of a certain number of historical calls or workload for that area. We now had our demand points which are street nodes (Geographic Data) representing a historical amount of workload (Call Data).

Results of the Location Allocation Analysis

At this point in our analysis we had our fixed facilities (theoretical fire station location candidates) and we had a network of demand points. We were ready to solve our service/demand problem to determine which of our theoretical locations would best serve as many of the demand points as possible.

We first ran the model requiring only eight fire stations to cover the entire district in order to determine if we could effectively provide adequate services with the resources we have but from improved locations. The results of the eight-station analysis showed that we should move two of our current stations to the west. While the geographic coverage was slightly improved in this model, the data analysis of the workload showed an increase in call volume for the eastern busier fire stations. This potential increased workload was unacceptable as it could lead to higher response times due to the mere volume of incidents those stations would now be responsible for.

A nine-station analysis was conducted and proved to be our best option for our given budgetary constraints. The model showed that by leaving our current eight fire stations in place and adding a ninth station near Candelas Parkway and Highway 72 we improved our emergency service coverage area. Furthermore, data analysis of the demand points assigned to the fire stations showed a decrease in workload across the district thus foreshadowing improved response times to a greater amount of calls for service.

By adding Station 9, the Arvada Fire Protection District can provide the same exceptional service to more customers in a timely manner. This model also allows for fire district expansion to the west as growth in Arvada continues. While we're confident in our new direction we continue to analyze the data looking for trends to ensure we provide the same exceptional service across the district well into the future. For any questions you might have please contact the Arvada Fire Protection District Offices. 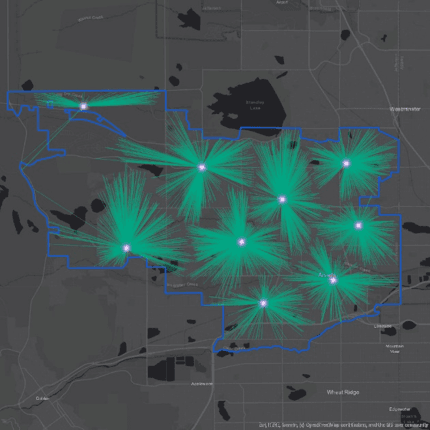